Stuck in a Badger Hole

Some stories of criminals really make you think they are actually animals. I mean, why else would a man try to climb into a badger hole?

Gregory Morrow, 22, was a man on the run from the police. He ended up stuck in a badger hole that was on land owned by the Bureau of Land Management (BLM) in New Orleans after leading a police chase. 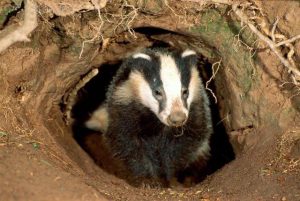 It all started at a simple traffic stop at a local Jack in the Box. Morrow and another man by the name of Jerry Boatman tried to get around the police without being stopped in their Tahoe. Officers tried to stop them but, instead, they jumped a curb and led a chase. The chase was cut short because of safety concerns, according to the Louisiana State Police.

When the car went by the officers, they noted that there was a dog and two men in the car. A couple hours later, Boatman was found walking on the BLM land and was arrested. A little later, the police aircraft notice the Tahoe in a ravine. They followed the tracks that were going away from the ravine for a mile or so when they came upon the dog from the Tahoe they had seen earlier. When officers tried to approach the dog, he ran into a hole made by a badger and wouldn’t come out. After the officers drug the dog out of the hole, they heard a man scream for help from that same hole.

They discovered that Morrow was trapped about eight feed underground in that hole. He was in feet first and had begun to lose the feeling in his arms already. After another hour and a half, the officers had Morrow dug from the hole. He was then identified as the driver of the stolen vehicle and was arrested. They took him first to a nearby hospital where he was treated for minor injuries. He had passed his time in the hole by working with a mobile app developer!

If the police had not found Morrow that day, he most likely would have died from exposure while stuck in that hole.

So next time you are on the run from police, stay clear of the badger holes!