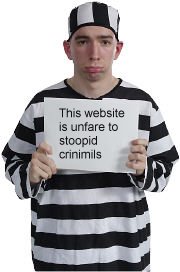 Have you heard the story of the zip tie bandit? In 2011, there was a manhunt for three men for auto theft and burglary. Some of the locals, seeing the commotion, went to speak with the police about what they were doing. The officers showed the residents a photo of the last suspect at large. The residents left and returned around thirty minutes later claiming they had caught the suspect. He had been sneaking through their backyard. Four of the people living there attacked the suspect and held him with zip ties until the police came to officially arrest him. The police found the suspect sitting on the ground, surrounded by several armed men, with his hands zip tied behind his back.

I don’t know about you, but I love stories like this. That is why I started this site, to collect stories of criminals making dumb mistakes.

We all love to hear about others flaws. When those flaws get you busted, though, they go to a whole new level. Could you imagine being one of the dumb criminals busted over a stupid mistake then having to spend time in jail? I am sure they will never live that down!

I hope you will follow me on this site as we explore the world of dumb criminals as inspired by the zip tie bandit.