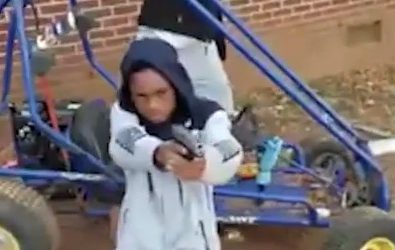 Have you heard of the Mannequin Challenge? This has become a viral trend on the Internet where people act like a mannequin, frozen in time, while a camera moves around and films them. For social media platforms that are popular like Instagram and Twitter, the hashtag #MannequinChallenge has been used. Many people believe that this trend started in Jacksonville, Florida in October of 2016 by some students. Since the initial posting, many groups have been inspired to create their own. You can find sports teams and professional athletes with their own Mannequin Challenge videos online. Many times, these videos are elaborate and complex. There have even been several commercials done lately in the Mannequin Challenge style.

Of course, when something like this becomes popular online, you can expect to see some of it from the criminal crowd as well. Such is the case of a particular Mannequin Challenge that was recorded in Huntsville, Alabama in November.

Kenneth Fennell White and Terry Martez Brown were both part of a mannequin challenge that was posted on Facebook on November 9th. Their video was styled as a shoot-out and has had well over a million views on YouTube. It was a very well done mannequin challenge, and was quite the media sensation, but it also caught the attention of the Madison County Sheriff’s Office.

After they police viewed the video, a search warrant as served by investigators.  When they entered the residence, they reportedly found marijuana that looked like it was packaged to be sold, a rifle, a shotgun, and two handguns. Two of the men in the video were charged. Kenneth White was charged with possessing a firearm as a felon and with possession of marijuana in the first degree. Terry Brown was charged with promoting prison contraband, loitering, and possession of drug paraphernalia.

I guess one thing they didn’t think about ahead of time is how the video could land them in a heap of trouble. Below is the original video.

One thought on “When a Mannequin Challenge Gets You in Trouble”